Review of News and Opinions from Michael Novakhov #TNT The #News And #Times: #Tweets – My Opinions In Black And White
January 27, 2023 8:53 am

Listen to this article
2023-01-19T21:18:03Z
The U.S. government hit its $31.4 trillion borrowing limit on Thursday, amid a standoff between the Republican-controlled House of Representatives and President Joe Biden’s Democrats that could lead to a fiscal crisis in a few months.

The U.S. government hit its $31.4 trillion borrowing limit on Thursday, amid a standoff between the Republican-controlled House of Representatives and President Joe Biden’s Democrats on lifting the ceiling, which could lead to a fiscal crisis in a few months.

Republicans, with a newly won House majority, aim to use the time until the Treasury’s emergency maneuvers are exhausted to exact spending cuts from Biden and the Democratic-led Senate.

Corporate leaders and at least one credit ratings agency warned a long standoff could rattle markets and unsettle an already shaky global economy.

Yellen warned that the June date was subject to “considerable uncertainty” due to the challenge of forecasting payments and government revenues months into the future.

“I respectfully urge Congress to act promptly to protect the full faith and credit of the United States,” Yellen told congressional leaders in a letter Thursday.

But there was no sign that either Republicans or Biden’s Democrats were willing to budge.

Republicans are trying to use their narrow House majority and the debt ceiling to force cuts to government programs, and argue that the Treasury could avoid default during a standoff by prioritizing debt payments. This idea has been explored in past standoffs, but financial experts have questioned its feasibility.

The White House is rejecting the idea out of hand.

“There will be no negotiations over the debt ceiling,” White House deputy press secretary Olivia Dalton reiterated Thursday aboard Air Force One. “Congress must address this without conditions as they did three times under (Republican former President) Donald Trump,”

The prospect for brinkmanship has raised concerns in Washington and on Wall Street about a bruising fight over the debt ceiling this year that could be at least as disruptive as the protracted battle of 2011, which prompted a downgrade of the U.S. credit rating and years of forced domestic and military spending cuts.

Moody’s Investors Service on Thursday said it believed Congress would reach a deal to avert default, but that negotiations would go down to the wire, contributing to market volatility.

“We’re not going to default on the debt. We have the ability to manage servicing and paying our interest. But we similarly should not blindly increase the debt ceiling,” Representative Chip Roy, a leading conservative, told Reuters.

Roy dismissed concerns about unsettling markets and risking a recession.

“That’s what they say every time. It’s like clockwork,” Roy said in an interview. “We’re already barreling toward a recession. The question is what it’s going to look like – unless the combination of monetary policy and fiscal policy saves us from our stupidity of having spent so much money.”

But corporate leaders expressed concern over the standoff.

“I’m concerned and I’m going to take any opportunity that I can, and we can as a firm, to engage with people in Washington to try to make sure they understand that we don’t think that this is something that should be played with,” Goldman Sachs Group Inc (GS.N) Chief Executive David Solomon said in an interview on Thursday.

Senate Republican leader Mitch McConnell predicted that the debt ceiling would be lifted sometime in the first half of 2023 under conditions negotiated by Congress and the White House.

“It’s always a rather contentious effort,” McConnell told reporters at the University of Louisville.

“The important thing to remember is that America must never default on its debt. It never has, and it never will,” McConnell said, adding, “The very basic business of funding the government has become very controversial in my party.”

Congress adopted a comprehensive debt ceiling, the statutory maximum of debt the government can issue, in 1939, intending to limit its growth. The measure has not had that effect, as, in practice, Congress has treated the annual budget process — deciding how much money to spend — separately from the debt ceiling — in essence, agreeing to cover the costs of previously approved spending.

The Republican plan calls for balancing the federal budget in 10 years by capping discretionary spending at 2022 levels.

Schumer, the Senate’s top Democrat, said in a statement: “Political brinkmanship with the debt limit would be a massive hit to local economies, American families and would be nothing less than an economic crisis at the hands of the Republicans.”

“We are optimistic that Democrats will come to the table and negotiate in good faith,” said Republican Representative Ben Cline, who leads a conservative task force on the budget and spending. “There’s a lot of room to negotiate when it comes to steps that can be taken to address the fiscal crisis that we find ourselves in.” 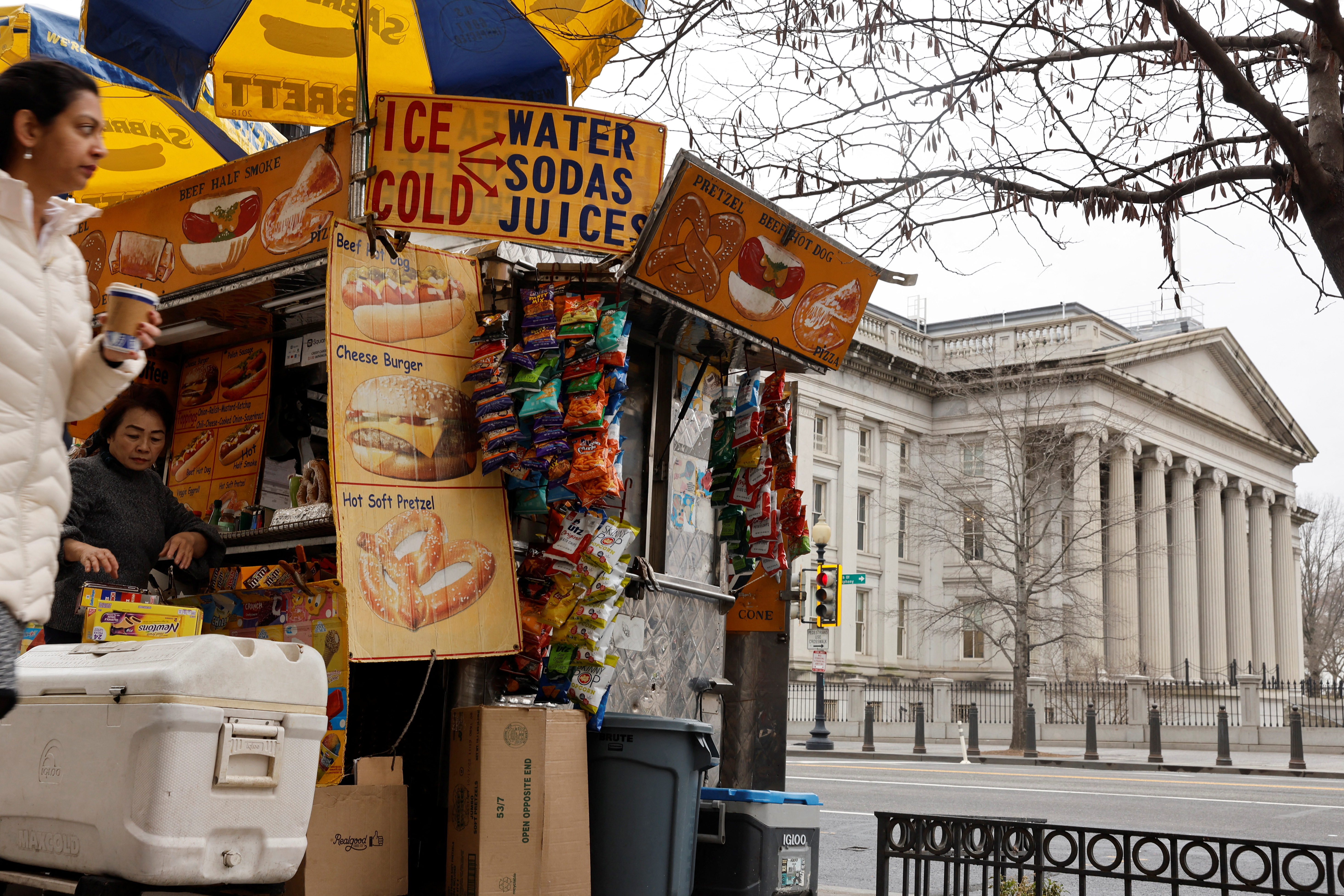 A vendor sets up a hot dog cart for the day, across from the U.S. Treasury building in Washington, U.S. January 19, 2023. REUTERS/Jonathan Ernst 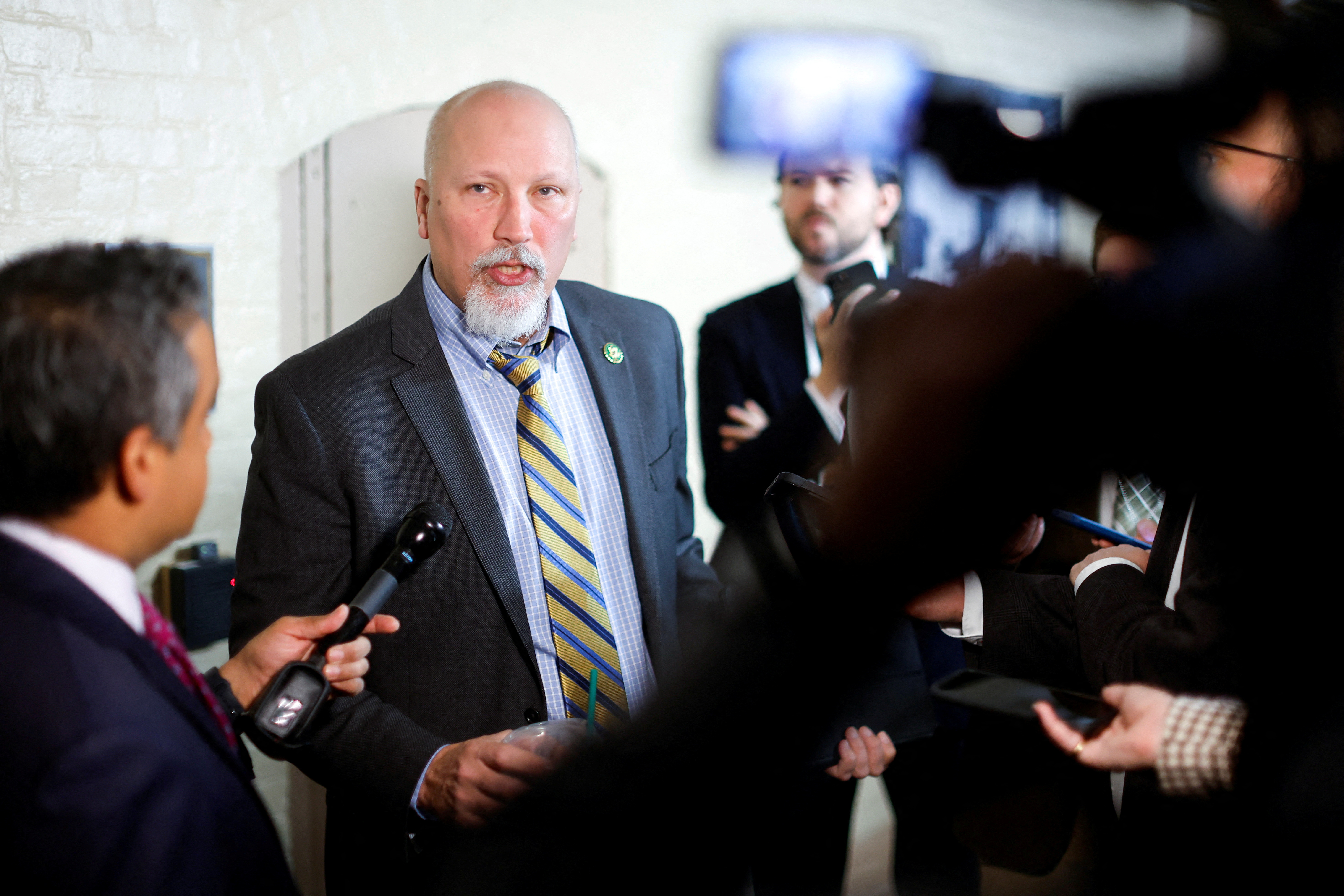 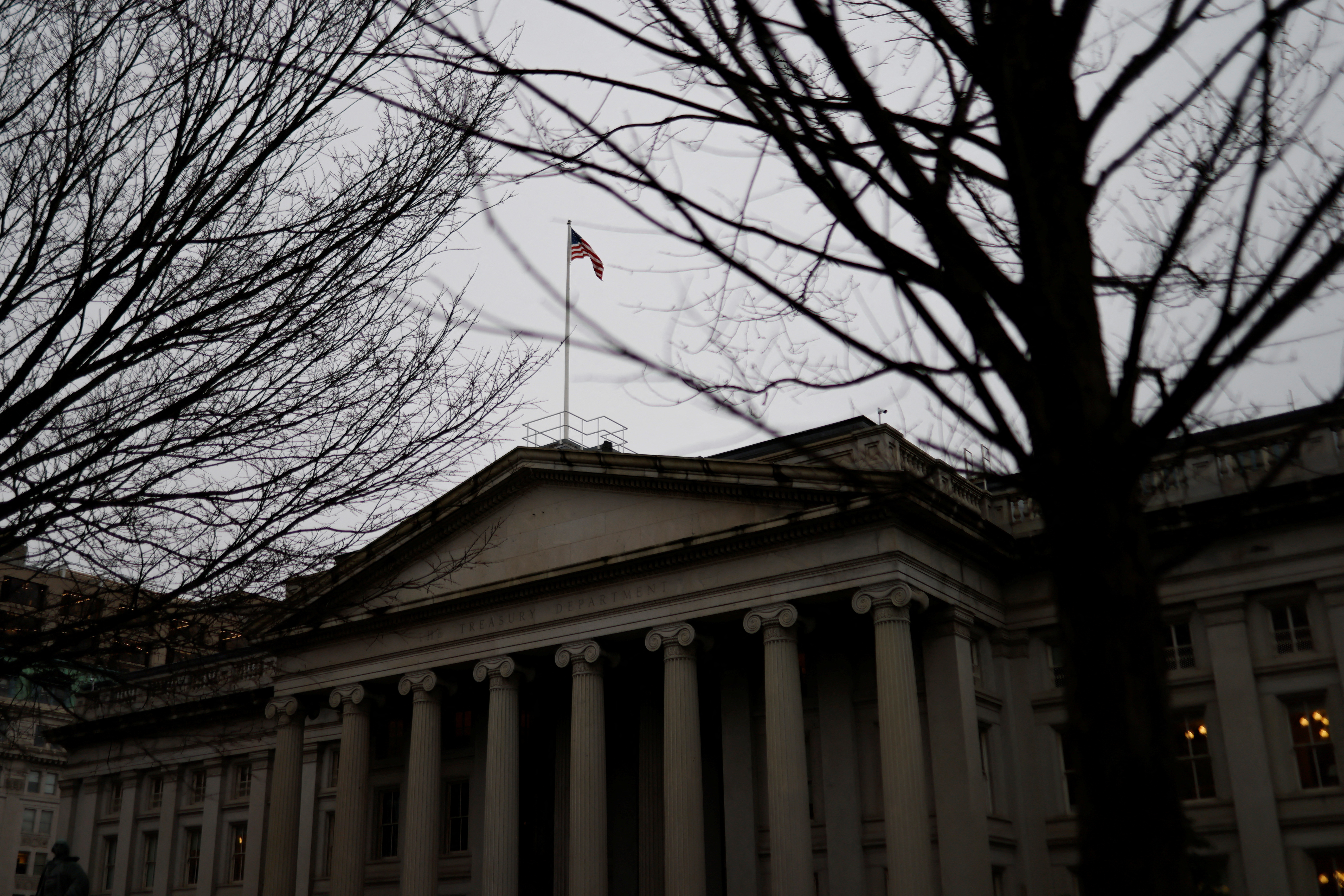 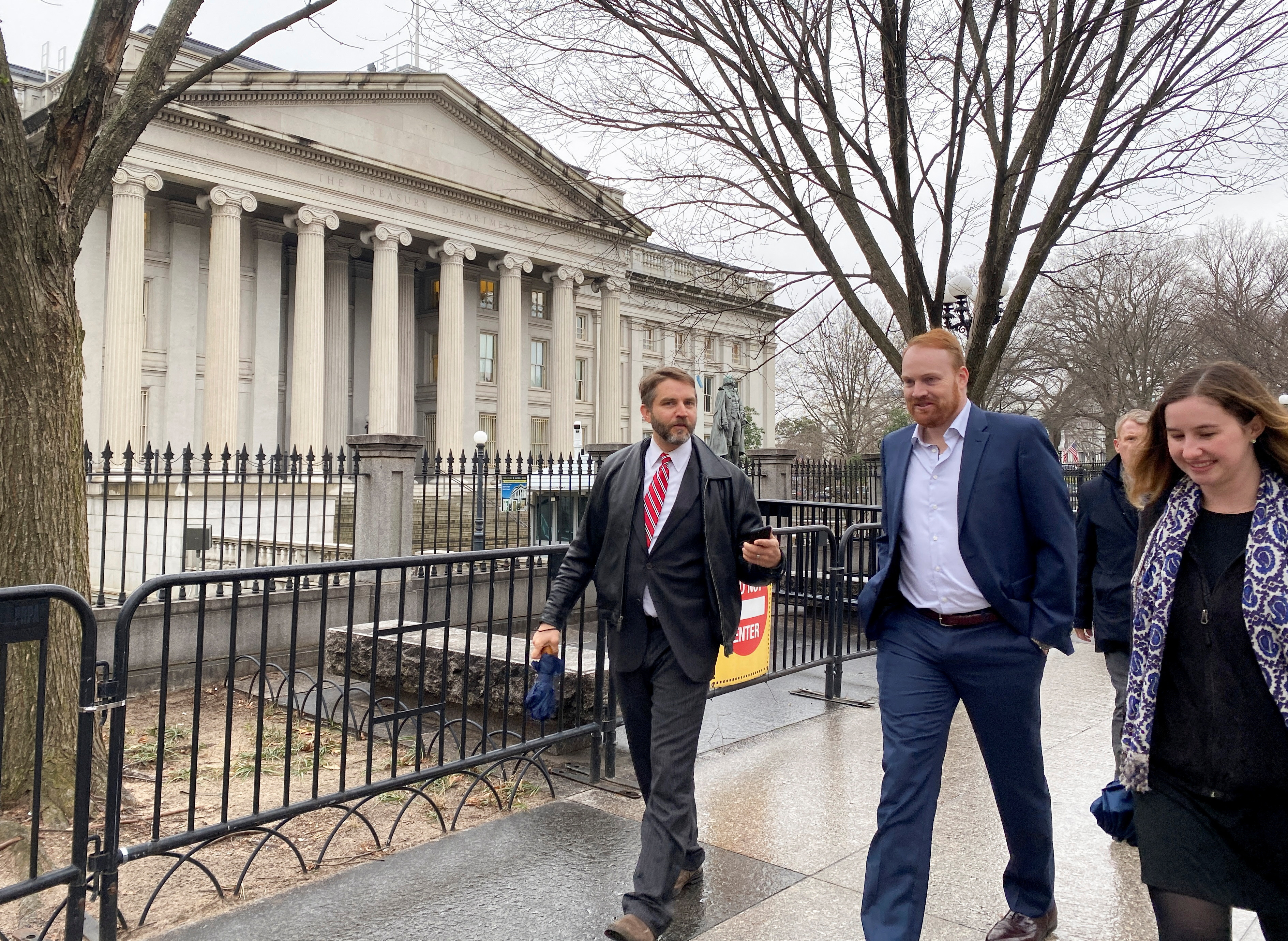 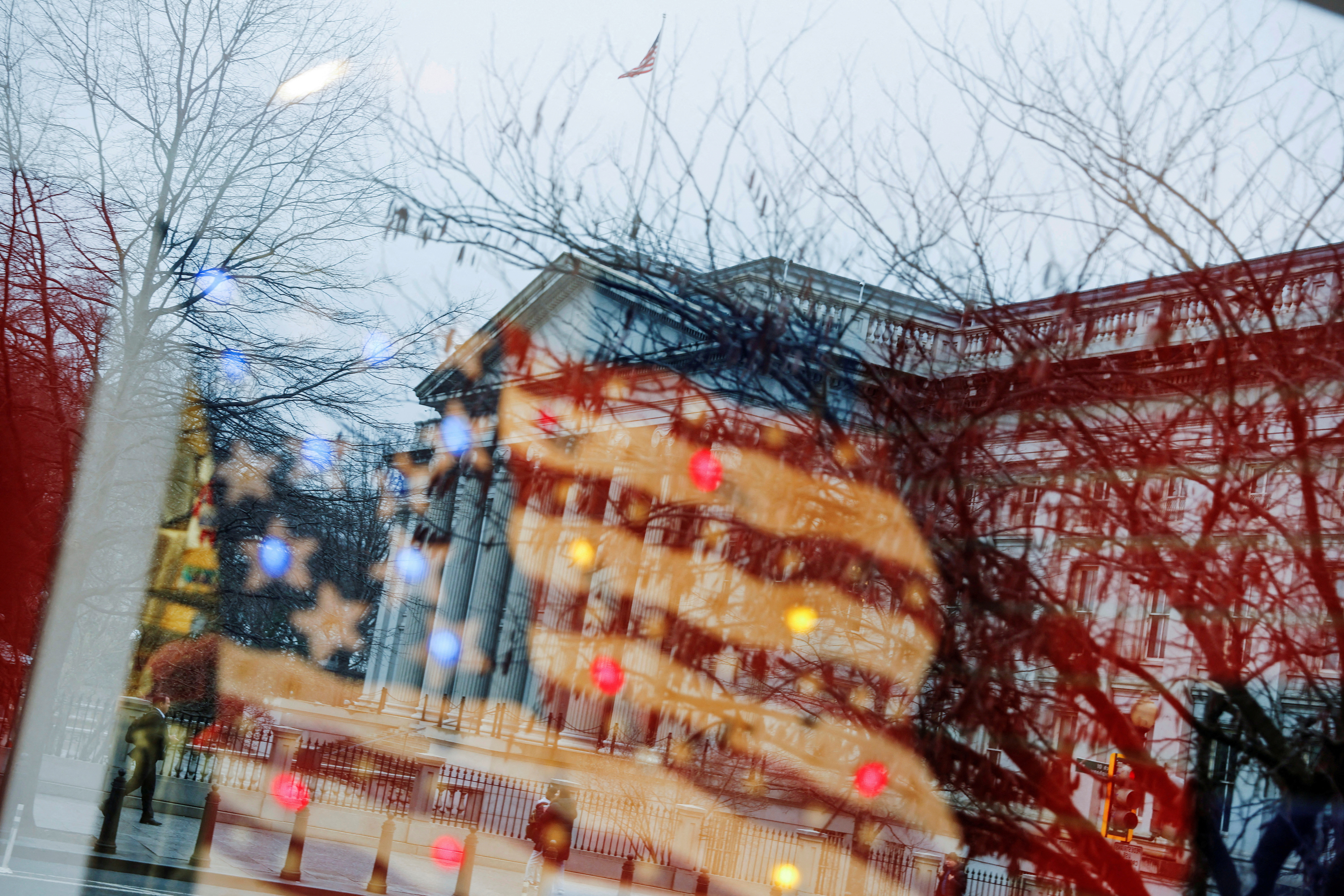 The U.S. Treasury building is reflected in the window of a souvenir shop, as the U.S. government hit its $31.4 trillion borrowing limit amid a standoff between the Republican-controlled House of Representatives, President Joe Biden and Democratic legislators that could lead to a fiscal crisis in a few months, in Washington, U.S. January 19, 2023. REUTERS/Jonathan Ernst
Advertisements

Review of News and Opinions from Michael Novakhov #TNT The #News And #Times: #Tweets – My Opinions In Black And White
January 27, 2023 8:53 am