Review of News and Opinions from Michael Novakhov #TNT The #News And #Times: #Tweets – My Opinions In Black And White
December 4, 2022 2:43 am 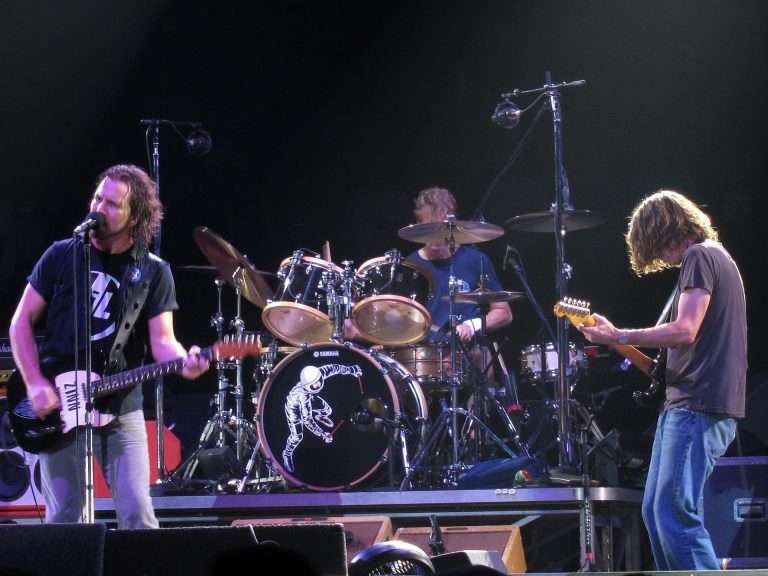 In 1996, the Chicago rock band Local H asked, “If I was Eddie Vedder / Would you love me any better?” It was a rhetorical question. For most of the 1990s, the charismatic singer and his bandmates in Pearl Jam were one of the most popular and acclaimed acts in rock, releasing five hit albums and spawning countless imitators. Although their cultural relevance faded with the 20th century, they still thrive as a touring band, becoming grunge’s answer to the Grateful Dead. In Long Road: Pearl Jam and the Soundtrack of a Generation, rock critic Steven Hyden provides a deep and engaging analysis of Pearl Jam’s remarkable career, and particularly what he considers its definitive identity as a live act.

Pearl Jam’s story starts with the end of Mother Love Bone, a Seattle band whose lead singer died of a heroin overdose shortly before its first album was released. MLB bassist Jeff Ament and guitarist Stone Gossard connected with Stevie Ray Vaughan acolyte Mike McCready to record a demo tape that made its way to Vedder, then a gas station attendant in San Diego. Vedder returned the favor with a demo of his own—including two songs that would appear on the band’s first album, 1991’s Ten. Album sales took off in 1992, thanks to MTV’s heavy rotation of “Jeremy.”

With that, Pearl Jam joined Nirvana as the most popular acts in the grunge scene. Kurt Cobain’s group is still seen as the cooler band, but Pearl Jam’s songs are more interesting and more varied, and Vedder’s voice more versatile and powerful than Cobain’s, even if it did contain the seeds of rock’s destruction by inspiring the likes of Creed’s Scott Stapp and Nickelback’s Chad Kroeger. Hyden puts it well when he explains that Nirvana “was the outsider band” while Pearl Jam “offered … community.” Then again, Nirvana’s video for “Smells Like Teen Spirit” has high schoolers partying in a gym, while “Jeremy” shows a student killing himself in front of his classmates.

Pearl Jam’s second record, Vs., set a record for first-week sales, but Cobain’s suicide in April 1994 disrupted the band’s momentum and sense of purpose. Vitalogy was released later that year, and on it Vedder’s discomfort with popularity and commercial success is evident. That same year, the band began its battle against Ticketmaster’s allegedly monopolist practices but ended up having to cancel its 1995 tour. Hyden laments that this “depressingly futile” fight, not Cobain’s death, marked the undeniable end of the grunge era by demonstrating that Pearl Jam fans preferred “performative opposition” to “actual opposition.” In our defense, President Clinton’s Justice Department didn’t see much merit to Pearl Jam’s argument, either. Pearl Jam continued to release solid albums in the second half of the 1990s, but they would soon signal a change in direction.

In 2000-01, the band emphasized its prowess as a live act by releasing bootlegs of 72 shows performed in support of its sixth album. (That tour was marred by tragedy when nine festivalgoers were killed in a stampede during a performance in Denmark.) Hyden contends that these live recordings, not the studio albums that brought them fame and cultural relevance, are the key to understanding Pearl Jam’s greatness. Although I’m not convinced by the argument, I admire Hyden’s description of the bootlegs: “With deep listening, everything becomes freighted with significance. A bit of stage patter or a seemingly miniscule change in a guitar solo feels special, like it’s yours.” And Pearl Jam’s evolution from a studio band to a live act is undeniable. They released more albums between 1991-2000 than they have in the 22 years since.

The clever structure of Long Road mimics a mixtape of bootleg recordings, with chapters named after live performances of Pearl Jam songs and two sections called Side A and Side B. At the heart of the book is a question: “How did they survive and thrive well into middle age when so many of their peers crashed and burned?” A clue, Hyden believes, is the relationship Pearl Jam formed with mentors like Neil Young and Pete Townshend, and he offers remarkable insights into these relationships, as well comparisons to the band’s peers and successors. Unlike too many of those peers, Pearl Jam was willing to sacrifice “short-term gain for long-term sanity.”

Hyden’s engaging style blends personal experience with insightful cultural analysis to advance thought-provoking arguments. Unfortunately, his efforts to establish the uniqueness of Pearl Jam occasionally lead him astray. To establish the selfishness of other mid-90s bands, Hyden argues that the Live song “White, Discussion” dismisses political engagement; in fact, the song expresses frustration with using talk as an excuse to avoid action. When singer Ed Kowalczyk repeats “Look at where all this talkin’ got us, baby!” a dozen times, he’s no more dismissive than Vedder is in 1998’s “No Way,” which repeats: “I’m not trying to make a difference / I’ll stop trying to make a difference.”

What’s more, the sophistication that Hyden demonstrates when discussing Pearl Jam’s music and career disappears when he ventures into politics. His discussion of how Generation X understood the Vietnam War is especially odd: “When I was growing up, all I really knew about Vietnam was that the people who fought there were treated badly by hippies when they returned home. And I learned that from Vietnam movies. My whole generation did.” This is unpersuasive. Not only did Hyden probably hear approximately 1,000,000 antiwar songs when he was a kid, but in virtually every Vietnam war movie, central sympathetic characters are surrounded by psychopaths and murderers. In the movies and elsewhere, the point was that war was unjustified, had no heroes, and showed America at its worst.

One of Hyden’s most compelling concerns is the band’s strange relationship with its primary fans, the members of Generation X. (Full disclosure: I’m one of them and we’re the best.) He presents the band as a reflection of Gen X’s “conflicting impulses,” such as a desire for attention and a fear of overexposure, a yearning for success and a disdain for selling out. Our worst tendencies include “hat[ing] ourselves and anything we see ourselves in. And few things about the ’90s seem more universally us than Pearl Jam.” That’s one of the many ironies of this earnest band.

Another is the frequent tension between the band’s ideals and those of its audience. In addition to the Ticketmaster fight, consider a 2003 concert when the audience responded to the band’s protest song “Bu$hleaguer” by chanting, “USA! USA!” (Here’s another irony: Shortly after the chant was popularized during the 1980 Olympic hockey tournament, Pearl Jam’s mentor Neil Young used it in what the Village Voice‘s Robert Christgau called the “unambiguously jingoistic chorus” of “Hawks & Doves.”) I thought of this disparity between artist and audience last month, when the New York Times found that members of Generation X are the most likely to vote GOP.

In the spirit of Gen X, let’s end with more irony. Pearl Jam’s biggest mainstream hit, “Last Kiss,” is a cover of a 1961 teen tragedy ballad that they recorded during a soundcheck, and its lyrics (“Oh, where oh where can my baby be? / The Lord took her away from me …”) are unlike any others the band recorded. The enormous success of this atypical song validates Hyden’s decision to call Pearl Jam’s music “the soundtrack of a generation” rather than its “voice.”

Long Road: Pearl Jam and the Soundtrack of a Generation

Christopher J. Scalia is a senior fellow at the American Enterprise Institute.

Review of News and Opinions from Michael Novakhov #TNT The #News And #Times: #Tweets – My Opinions In Black And White
December 4, 2022 2:43 am