National lawmakers are pushing through an urban development reform bill for its second reading this week without consulting with the general public or the Cabinet of Ministers. , prompting one local non-government organization to call it “scandalous”.

Ukrainian Deputy Culture Minister  Kateryna Chuyeva said on Tuesday, Nov. 29 that draft bill No 5655 on urban development reform, as recently approved by the sectoral committee, the Parliamentary Committee on Regional Development and Urban Planning for its second reading, will be a threat historical buildings.

Chuyeva noted that the Ministry’s proposals had still not been included in the final version of the bill.

“The law will have a direct effect on what Ukrainians are selflessly fighting for on all fronts – our traditions, history, heritage, and, therefore, our identity. This document should be amended and prepared for the second reading stage, but it might be considered at the next plenary sitting of Parliament without taking into account the comments of the Culture Ministry, ” she told state news agency Ukrinform

It is last wooden building on Turhenyevska Street. The house is lined with white “royal” brick. The Servit company built an 11-story “clubhouse” close to the monument in 2017. 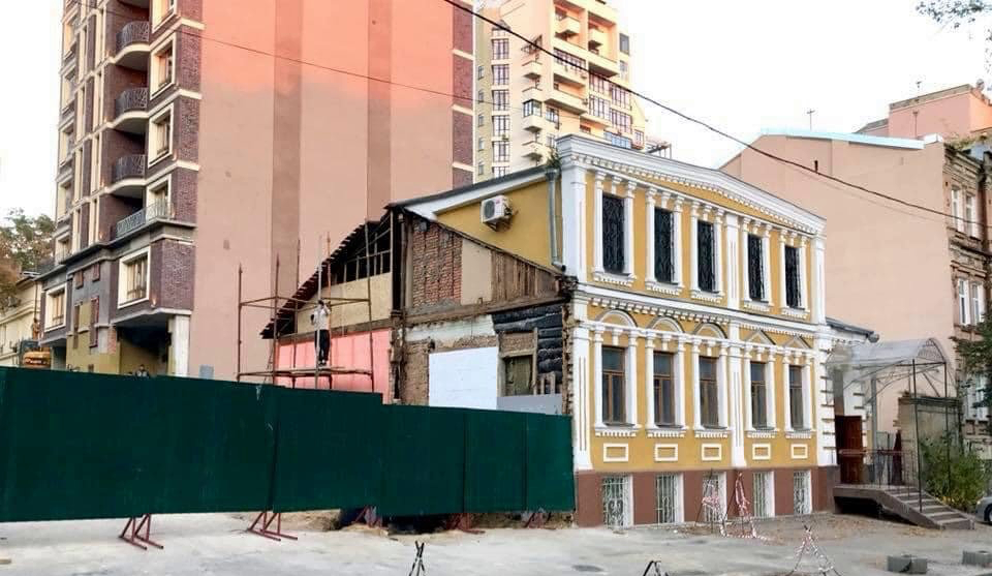 According to an Economichna Pravda investigation in August 2021, the developer has already begun to demolish the estate despite an order issued by  the Department of Urban Development of Kyiv City State Administration.

Another historical building that is under threat in the capital is Miller’s House at Hoholivksa St, 32. The manor dates back to 1910-1912 and has an outbuilding (side extension to the main building) built in 1893-1894.

However, the house has been in disrepair since 1991.

Back in 2012, Kyiv city authorities deprived the building of its status as a monument and transferred the building into the ownership of a communal enterprise called Spetszhylfond, and obliged it to evict the remaining residents and rebuild it.

However, Spetszhylfond has not begun any works since 2012, and instead it published an announcement about its sale “for demolition”.

Kyiv Post contacted Iryna Fedoriv, head of Public Relations at Ukrainian non-government organization CHESNO movement. According to her the reform bill was approved for its second reading by Parliament, without holding consultations with the general public or the Cabinet of Ministers.

“The final version of this scandalous law, as prepared for the second reading, was not discussed with the public. We even cannot pass comment on the legislation because nobody is aware of the latest amendments proposed to the document. Since the Culture Ministry of criticizes the proposed bill, it means that something ready wrong with it,” Fedoriv said.

Furthermore, she noted that the sectoral committee, the Parliamentary Committee on Regional Development and Urban Planning, approved the draft bill in cooperation with former lawmakers of the pro-Russian faction, the Opposition Platform – For Life, which was banned by the Eighth Administrative Court in June 2022.

“The parliamentary committee approved the reform by 16 votes, three of which were lawmakers from pro-Russian faction the Opposition Platform – For Life” she said.

CHESNO has called on lawmakers not to vote for the final version of the bill, which has not been presented to the public.  Iryna Fedoriv noted that 2,000 pages of amendments had been proposed to the bill, which public organizations still needed to study or comment on. As a result, nobody knows what Parliament will be voting for.

Olena Shulyak, Deputy Head of the Parliamentary Committee on Regional Development and Urban Planning, informed that public organizations support the reform. However, the final version of the reform bill is still not available to the public.

According to Kyiv Post’s sources in the Ukrainian Parliament, there are plans to put the controversial  reform to the vote this week, on Dec. 1-2.

Review of News and Opinions from Michael Novakhov #TNT The #News And #Times: #Tweets – My Opinions In Black And White
February 3, 2023 10:07 pm

Review of News and Opinions from Michael Novakhov #TNT The #News And #Times: #Tweets – My Opinions In Black And White
February 3, 2023 10:07 pm
Advertisements