On Saturday night, some 100 dancers had gathered at the Star Ballroom Dance Studio in Monterey Park, Calif. to celebrate the Lunar New Year. It was a place frequented by elderly and middle aged couples, who went to learn moves from international ballroom competitors.

It turned into a place of tragedy when a mass shooting left ten dead and another ten injured. More details about the victims are emerging, as the LA County Coroner’s Office begins naming the victims. Two of the victims, My Nhan and Lilan Li, both women in their 60s, have been identified.

“It’s difficult to believe that [this] happened here in Monterey Park,” Monterey Park Mayor Henry Lo said at a press conference on Sunday. “I want the community to be rest assured that our police department will continue every day to protect the safety of everyone.”

The shooting occurred on the eve of the Lunar New Year holiday, in a city whose population is about 66% Asian American. It was the 33rd mass shooting of the year and the fifth mass murder shooting, according to the Gun Violence Archive. 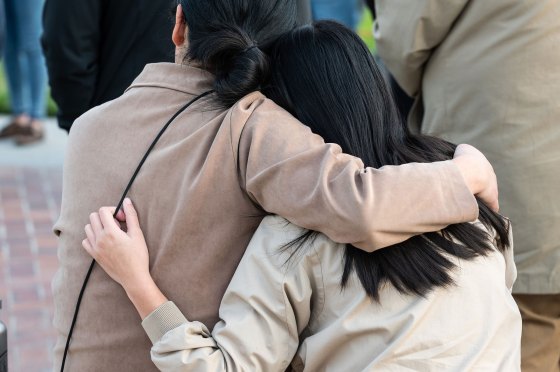 Nicholas Agro—USA Today/ReutersLocal clergy and people gather to honor of the victims of the Star Ballroom Dance Studio shooting during a vigil held by the Clergy Community Coalition at city hall, near the scene of the shooting in Monterey Park, Calif. on Jan 22, 2023.

Lilan Li has been identified by the Los Angeles County Coroner’s Office. She was in her 60s.

When a gunman walked into Star Dance Studio in Monterey Park, Calif. late Saturday night, Ming Wei Ma was the first to rush towards him, according to friends. A beloved dance instructor, witnesses told Fox LA and ABC7 that he was a victim in the mass shooting.

At the Langley Center, where a victim resource center has been set up, friends remembered Ma as a caring member of the dance community, who lost his life trying to save others.

“He was an extremely respected, very beloved, very caring teacher, instructor, extremely kind human being, and he’s very much missed by everyone in the Star Dance community,” friend Eric Chen told Fox LA.

In a statement on Twitter, 65-year-old Mymy Nhan’s family said that she had spent her weekends at the dance studio in Monterey Park for years. “It’s what she loved to do,” the family wrote. “But unfairly, Saturday was her last dance.”

Mymy’s family said she was a loving aunt, sister, daughter and friend known for her warm smile and kindness. “Mymy was our biggest cheerleader,” they wrote.

“We are starting the Lunar New Year broken.”

Mymy Nhan was the first person shot and killed during the #MontereyPark mass shooting.

I’ve covered a lot of tragedies, and never imagined one would hit so close to home.

My husband’s family is hurting beyond measure.
Here’s a statement on behalf of the family. pic.twitter.com/q5GXa0g4Kh