Review of News and Opinions from Michael Novakhov #TNT The #News And #Times: #Tweets – My Opinions In Black And White
November 27, 2022 1:13 pm

When people repeat the rallying cry of “Jin, Jiyan, Azadî,” they are speaking Kurdish. The slogan, meaning “Woman, Life, Freedom,” has recently gained global recognition after the death of Jîna Mahsa Aminî and the feminist protests that followed in Iran.

Jîna Mahsa Aminî was a 22-year-old Kurdish woman from Saqqez, a city in the Kurdistan Province of Iran. Her family called her by her Kurdish name, Jîna, meaning “life.” The Iranian state does not allow its citizens to legally register any names that are not of Persian or Islamic origin, so as a result, she was identified by her state-approved name: Mahsa Amini.

Jîna was arrested by Iran’s morality police, also known as Gasht-e-Ershad, after being accused of improperly wearing her hijab outside of a metro station in Tehran. She was beaten and tortured by authorities while inside a police van that took her to a detention center. Two days later, she suffered a cardiac arrest, and after three days in a coma she died in the hospital on September 16. At Jîna’s funeral, women removed their hijabs and began chanting “Jin, Jiyan, Azadî” to remind us of a long-lived Kurdish struggle against state oppression.

The chant has been translated to various languages. In Farsi, “Zan, Zendegi, Azadi.” In French, “Femme, Vie, Liberté.” In Spanish, “Mujer, Vida, Libertad.” But its origins, rooted in Kurdish feminist thought, have been forgotten in the process. It’s an erasure that mirrors how Aminî’s Kurdish identity is overlooked in news coverage and social media by solely mentioning her Iranian nationality. In order for this revolution to be truly successful, it must be intersectional—a movement that breaks down the borders of nationalism and is inclusive of all identities.

Read More: What the Success of Women-Led Protests Tell Us About Iran’s Future

“Jin, Jiyan, Azadî” was first used during Kurdish feminist resistance movements in the late 20th century and has historical ties to the Kurdistan Workers’ Party (PKK) and their women’s military wing, the YJA STAR. The phrase was born out of anti-capitalist, anti-patriarchal, Marxist-Leninist grassroots activism in response to Kurdish persecution from the governments of Iran, Iraq, Turkey and Syria. Kurdish people are the fourth-largest ethnic minority in the Middle East, but they have never obtained an independent nation state.

Abdullah Öcalan, founder of the PKK and a political prisoner in Turkey since 1999, explains how national liberation must first begin with the liberation of women in his book The Political Thought of Abdullah Öcalan. He stated, “a country can’t be free unless all women are free” and “a woman’s revolution is a revolution within a revolution.” “Jin, Jiyan, Azadî” represents this resistance of Kurdish women against all tyranny as well as their achievements in effectively organizing to establish autonomy through their own feminist movement. Kurdish feminism declares that woman’s liberation will be the liberation of all life, hence the interweaving of the words: woman, life, freedom. 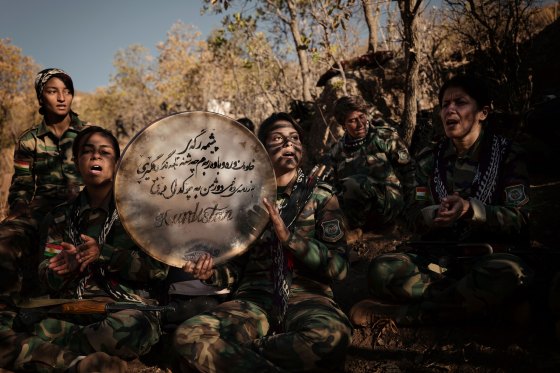 As a Kurdish woman myself, it has been painfully familiar to see the omission of Jîna’s Kurdish identity and the origin of “Jin, Jiyan, Azadî.” It echoes a grim past of systemic erasure and restrictions on social, cultural, linguistic, religious, and economic freedoms not only for Kurdish people, but many other ethno-linguistic identities that exist in Iran. While the world has chanted “Jin, Jiyan, Azadî” freely, we are reminded of the injustices Kurdish intellectuals, artists, political leaders and thinkers have faced by being imprisoned or killed for speaking our language.

A long history of Kurdish persecution continues at this very moment with Iran’s Islamic Revolutionary Guard Corps (IRGC) targeting Kurdistan with drones and missiles and arresting protesters. On November 20, videos and audio of the IRGC shooting at unarmed civilians circulated online, revealing a full-blown massacre in Kurdistan by the Iranian government.

Read More: Iran Has a Long History of Political Activism and Protest. Here’s What To Know

Throughout history, Kurdish labor has been exploited for various political interests while Kurds were forgotten once the job was done. During the 1979 Iranian Revolution, the Kurdish Democratic Party of Iran fought on the ground with leftist and Islamic movements to remove the Shah from power. Once the Islamic Regime took over the country, the Kurds and their goals for autonomy were abandoned.

And the whole world watched in 2014 as Kurdish female resistance fighters in Syria, known as the Women’s Protection Units (YPJ), actively defended their homeland and fought ISIS for the United States and Europe. As the YPJ was influenced by Öcalan’s feminist ideology, “Jin, Jiyan, Azadî” echoed on the front lines as a battle cry. But while fashion magazines in the West objectified these Kurdish female fighters, their women-led struggle and the lives that were lost in the war went largely unrecognized.

Now, in 2022, a Kurdish woman’s death at the hands of the Iranian government ignited feminist mobilization around the world. We cannot repeat the history of leaving Kurdish people behind.

“Jin, Jiyan, Azadî” is not only a symbol of resistance; it also represents the actual labor of Kurdish women in successfully carrying out social revolutions for a more progressive and inclusive society. If we are to honor Jîna Aminî and embrace the true philosophy behind “Woman, Life, Freedom,” we must credit Kurdish women and their forward-thinking contributions to feminism.

Review of News and Opinions from Michael Novakhov #TNT The #News And #Times: #Tweets – My Opinions In Black And White
November 27, 2022 1:13 pm