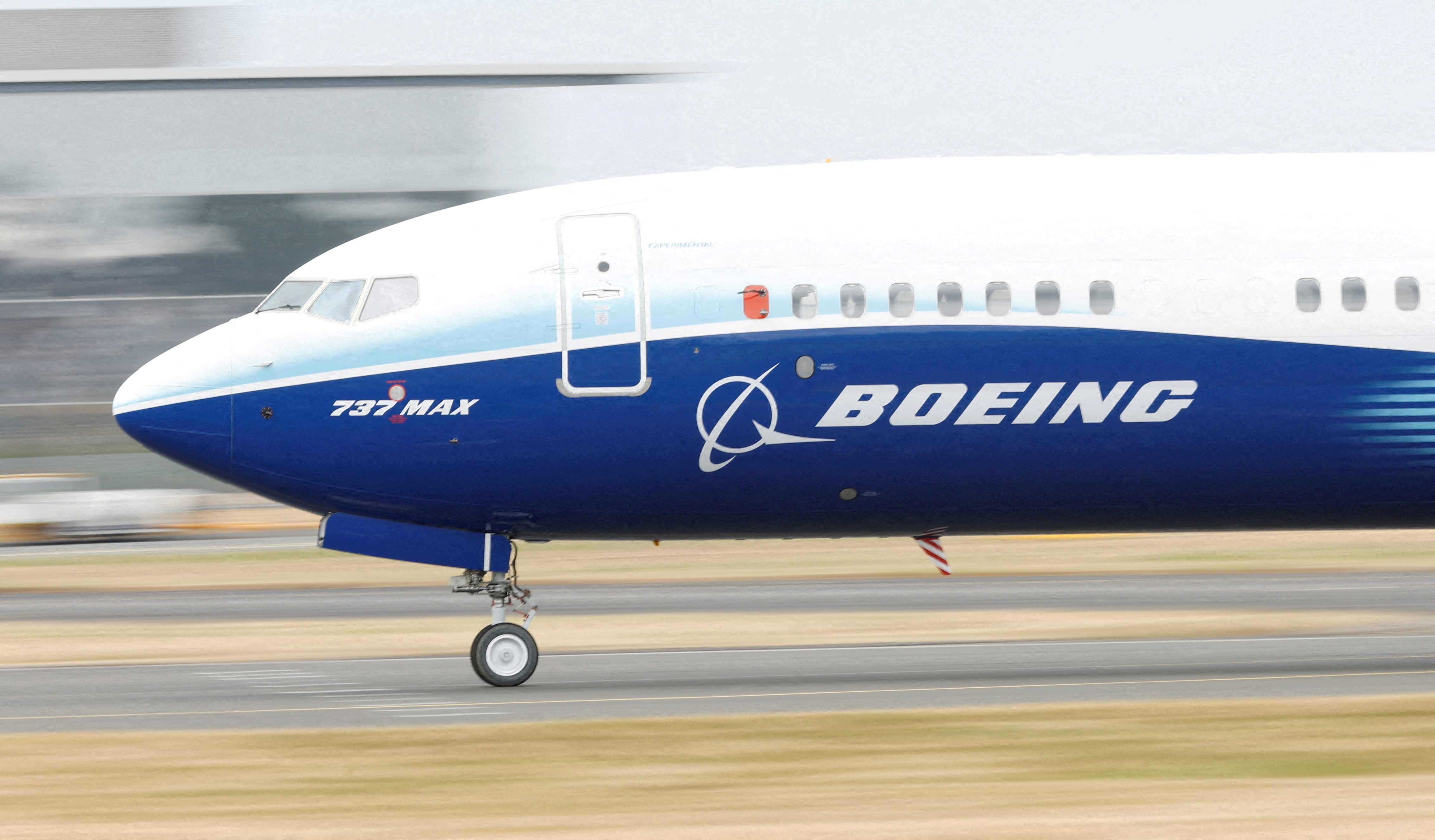 A Boeing 737 Max aircraft during a display at the Farnborough International Airshow, in Farnborough, Britain, July 20, 2022. REUTERS/Peter Cziborra/File Photo

A key U.S. lawmaker is proposing an extension of a certification deadline for two new versions of Boeing’s (BA.N) 737 MAX and requiring retrofitting existing planes, according to a document reviewed by Reuters.

Boeing is seeking an extension from Congress of a December deadline imposing a new safety standard for modern cockpit alerts for the 737 MAX 7 and 737 MAX 10 variants after two fatal 737 MAX crashes killed 346 people in Indonesia and Ethiopia and led to the plane’s 20-month grounding.

Senate Commerce Committee chair Maria Cantwell drafted a proposal that would grant exceptions for the two MAX variants if they include safety enhancements “such as enhanced angle of attack (AOA) and a means to shut off stall warnings and overspeed alerts, for all MAX aircraft” according to the summary document reviewed by Reuters.

Boeing would be required to bear the costs of the mandatory safety enhancements retrofit for MAX planes currently in service, according to the proposal.

In comments to Reuters earlier Tuesday, Cantwell said, “We do want to push for safety enhancements and we’ll see what happens – some people just want a straight extension … Safety should be the focus, not a date, safety.”

The requirements were adopted by Congress as part of certification reform passed after two fatal 737 MAX crashes killed 346 people in Indonesia and Ethiopia and led to the plane’s 20-month grounding.

The Federal Aviation Administration (FAA) in 2020 required Boeing to retrofit planes to ensure MCAS could only activate if it received data from two AOA sensors. Cantwell’s proposal would require a further enhancement and require regular briefings to Congress by the FAA on the MAX status.

Boeing declined to comment Tuesday, but Chief Executive Dave Calhoun said in October he was confident it will get the extension.

After Dec. 27, all planes must have modern cockpit alerting systems to be certified by the FAA, which would mean significant delays for the new MAX aircrafts’ deployment unless Congress grants a waiver to extend the deadline.

In September, Senator Roger Wicker, the top Republican on the Commerce Committee, proposed extending the deadline for Boeing to win approval for the two new variants until September 2024.

“It should be extended,” Wicker told Reuters on Monday, referring to the deadline. “I think it needs to happen.”

Boeing has won significant support for an extension from lawmakers, the U.S. Chamber of Commerce but faces strong opposition from relatives of many victims of the two fatal crashes, arguing Boeing was “bullying” Congress into action.

Earlier this month, acting FAA Administrator Billy Nolen said he does not expect the agency will certify the 737 MAX 7 before the December deadline.

Nolen said he believes the FAA cannot continue any MAX certification work after the deadline without congressional action.

Review of News and Opinions from Michael Novakhov #TNT The #News And #Times: #Tweets – My Opinions In Black And White
February 3, 2023 9:16 pm

Review of News and Opinions from Michael Novakhov #TNT The #News And #Times: #Tweets – My Opinions In Black And White
February 3, 2023 9:16 pm
Advertisements