Review of News and Opinions from Michael Novakhov #TNT The #News And #Times: #Tweets – My Opinions In Black And White
November 30, 2022 8:21 am 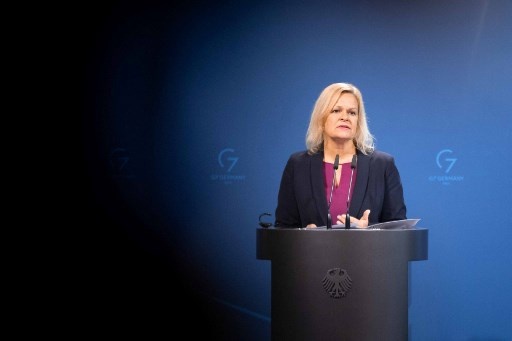 Russia’s war in Ukraine has a “significant impact” on the security of other countries, G7 interior ministers said on Friday, Nov. 18, warning of attacks on key infrastructure and risks posed by returning foreign fighters.

German Interior Minister Nancy Faeser reaffirmed the Group of Seven’s “unwavering solidarity” with Ukraine, after hosting two days of talks in the western town of Eltville.

“The war of aggression against Ukraine has had a significant impact on the internal security of G7 countries,” the ministers from Britain, Canada, France, Germany, Italy, Japan and the United States said in a joint communique.

Europe was stunned earlier this week when a missile blast struck a Polish village near the Ukrainian border, killing two people and raising fears of a dangerous escalation in the conflict.

Kyiv’s allies have since said the explosion was probably caused by a Ukrainian air defence missile — while stressing Moscow was ultimately to blame for starting the conflict.

Faeser and her counterparts in the club of rich nations said they were closely monitoring the fallout from Russia’s war, including the rise of “hybrid threats” designed to destabilise democracies and spread insecurity.

“Hybrid threats to our critical infrastructure, in addition to information manipulation, have increased significantly since the start of Russia’s war,” the interior ministers said.

The explosions that damaged the Nord Stream gas pipelines between Russia and Germany in September had highlighted “the need to better protect our critical infrastructure”, they said.

Sweden on Friday confirmed that the blasts were caused by sabotage. Washington and Moscow have both denied any involvement in the incident and each has pointed the finger at the other.

“Developing stronger overall security awareness… and building partnerships at the national and international level, including with the private sector, is crucial to become more resilient,” the G7 interior ministers said.

They also warned of new threats that could emerge when foreign fighters return home Ukraine with combat experience, as well as the risks posed by the increased flow of weapons in the region.

“A small number” of volunteer fighters in Ukraine “could pose a heightened threat upon their return”, they said.

The G7 ministers pledged to work closely with Ukraine on “a strict arms control regime” to prevent the illegal trade of firearms and ammunition.

Review of News and Opinions from Michael Novakhov #TNT The #News And #Times: #Tweets – My Opinions In Black And White
November 30, 2022 8:21 am