Japanese Prime Minister Fumio Kishida’s first visit to Washington as leader on January 13, 2023 marked a major transformation in the U.S.-Japan alliance. Japan’s new security reforms and Tokyo’s proactive response to the Ukraine crisis have been warmly received in Washington. They underscore a Japan more determined to strengthen its own defense capabilities and contribute to regional deterrence, and reveal new potential to leverage the bilateral partnership to address serious challenges to the international order.

Not surprisingly, U.S.-Japan relations moved at a fast tempo in the weeks and days prior to the arrival of the Japanese leader, with major policy announcements and bilateral agreements. At the end of 2022, the Japanese government revised its National Security Strategy (NSS), National Defense Strategy, and Defense Buildup Program. A major pledge ran through the revised strategic documents: that Tokyo is ready to marshal its comprehensive national power to meet the challenges derived from the most severe security environment of the past 70 years.

Early in the new year, Yasutoshi Nishimura, head of Japan’s Ministry of Trade, Economy and Industry, traveled to Washington to sign agreements to strengthen cybersecurity cooperation with the U.S. Department of Homeland Security and to collaborate in eradicating forced labor from global supply chains with the U.S. trade representative. Just a fortnight before Kishida’s arrival, the Security Consultative Committee (2+2 foreign and defense ministers) issued a joint statement praising a modernized alliance attuned to the current era of strategic competition and ready to move in lockstep to implement a shared commitment to integrated deterrence. A week of U.S.-Japan high-level diplomacy yielded commitments to improve allied defense posture in Japan’s southwestern islands and to cultivate a more agile U.S. Marine littoral regiment in Okinawa. It also extended Article 5 of the security treaty to apply U.S. defense commitments to space and cemented the bilateral partnership on space exploration. Agreements materialized on defense R&D and supply chain security as well.

To cap it all, the Biden-Kishida joint statement immediately following the summit noted not only that the “security alliance has never been stronger,” but that the allies “strongly oppose any unilateral attempts to change the status quo by force or coercion, anywhere in the world,” (emphasis mine). This captures an ongoing and portent transformation: While bilateral security commitments remain the anchor of this partnership, the United States and Japan increasingly regard the alliance as an instrument to project their combined influence to promote stability and rule of law in a turbulent international system. This includes efforts to preserve peace in the diplomatically choppy waters of the Taiwan Strait. The shock of Russia’s invasion of Ukraine dramatically expanded the geographical boundaries of U.S-Japan strategic coordination, since Tokyo was among the first to publicly condemn the violence and join the international coalition to punish Putin’s war of aggression. Ukraine left an indelible mark on the Japanese public mindset and its government during the precise year that the country’s overall security and defense policies were under review. It imbued a strong awareness that only nations prepared to defend themselves can expect to muster wide and sustained international support.

The Biden-Kishida summit reaffirmed the strategic convergence between the two nations. The specter of three revisionist powers has helped focus their agenda: North Korea’s missile and nuclear threats; China’s use of coercion, not international law, to advance expansive territorial claims; and Russia’s large-scale war in Europe. Even so, Japan’s response to the adverse international environment stands out. Of America’s allies in Asia, Tokyo has been the most willing to explicitly call out Chinese behavior that undermines the rules-based order, and the newly revised National Security Strategy went further, naming China as Japan’s biggest strategic challenge. A key objective for Kishida in coming to Washington at this juncture was to explain, and gain support from Japan’s core ally, how his administration intends to operationalize a far more ambitious strategic agenda on defense, diplomacy, and development.

Not surprisingly, bilateral talks focused on defense. Under Kishida, Japan has done away with the decades-old informal ceiling on defense expenditures at 1% of GDP. Instead, in the next five years, Japan’s defense expenditures will aim for the 2% mark both by revising what can be included in the defense budget (e.g., Coast Guard operations and protection of critical infrastructure) and through an expansion in core defense expenditure of 50% — a sizable increase. A key innovation in the new NSS was Japan’s adoption of counterstrike capabilities, providing for the first time in the postwar era authorization for its Self-Defense Forces to respond to an attack by hitting deep in enemy territory. The bar on the use of force remains high — Japan’s survival must be at stake, no other means of response must be available, and only the minimum use of force can be employed. But Japan’s ability to wield a spear to defend itself will both strengthen deterrence and transform the alliance. American intelligence and reconnaissance support will be essential to the success of a Japanese missile counterattack. More importantly, greater integration of command and control structures will be required as Japan’s power projection capabilities grow. This has yet to happen and will be a true test for alliance modernization.

Given the novelty and strategic implications of Japan’s security reforms, they received top billing in the assessment of the Biden-Kishida summit. But other equally important priorities came through in Kishida’s policy speech delivered at Johns Hopkins University’s School of Advanced International Studies (SAIS). For one, Japan’s enhanced defense posture will beget more proactive diplomacy in ways that make Japan a more valuable ally for the United States. Kishida’s Washington trip was part of a G-7 tour with visits to the five member countries in preparation for Japan’s hosting of G-7 leaders’ summit in May. The G-7 has emerged rejuvenated from its response to the Ukraine crisis, and Japan’s engagement with Europe has reached new heights. Last year, Kishida was the first Japanese prime minister ever to attend a NATO summit. In his diplomatic tour this month, Japan and the U.K. reached a landmark reciprocal access agreement to facilitate troop deployments for joint training and exercises, adding to Japan’s network of defense partnerships. In his address at SAIS, the prime minister previewed a strong diplomatic push in Japan’s own neighborhood with both an updated Free and Open Indo-Pacific policy and a special summit with the Association of Southeast Asian Nations at the end of the year, and greater reassurances of his administration’s will to resolve bilateral issues with South Korea in the near term. These will be the new yardsticks by which to measure the success of Japan’s diplomatic outreach in this new political era after the premiership of Shinzo Abe.

The visiting prime minister was keen to appeal to the Global South, driving home the message that diverse values do not overshadow the common goal of protecting a world order based on rules, not naked power. But to earn their trust, Japan and others must deliver on developing world priorities on food and energy security, debt sustainability, and healthcare. The question for like-minded nations is whether they can deliver on development and economic engagement. And so Kishida directed one important message to an audience of one: a call for the United States to return to the Trans-Pacific Partnership (TPP) project. Kishida noted that even a successful Indo-Pacific Economic Framework will fall short in meeting regional demands for comprehensive economic engagement. This admonishment is certainly not new. Japanese officials have delivered it repeatedly and American counterparts feel they have heard it ad nauseum. But the fact remains that trade liberalization is the one area where the United States and Japan have not been able to move in sync. Their closer alignment on defense and diplomacy only makes this contrast starker. The context of Kishida’s TPP entreaty matters, for here is one leader having vanquished a longstanding policy taboo (expanding defense expenditures), asking his counterpart to unlock possibilities that would ensue from accomplishing a similar feat (actualizing trade leadership).

This new chapter in U.S.-Japan relations is just starting. The hard work of developing a more effective command and control structure, and of planning for an effective division of labor among the allies to address regional contingencies, is still ahead. A shared determination to confront the growing challenges that authoritarian powers pose to the rules-based system does not solve the myriad complications of a coordinated approach going forward. A case in point is technological competition with China. Notably, there was no word during Kishida’s visit about Tokyo’s willingness to strengthen export controls on China to emulate the U.S. new restrictive approach. And Kishida did point out that sustaining an open free trade system remains the last frontier in the U.S.-Japan alliance. 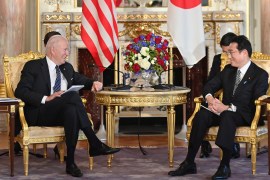 Review of News and Opinions from Michael Novakhov #TNT The #News And #Times: #Tweets – My Opinions In Black And White
January 31, 2023 5:04 am

Review of News and Opinions from Michael Novakhov #TNT The #News And #Times: #Tweets – My Opinions In Black And White
January 31, 2023 5:04 am
Advertisements