It was 207 years ago that Thomas Jefferson wrote, in a letter to a friend, “Where the press is free and every man able to read, all is safe.”

His pithy wisdom seems lost on the Anti-Defamation League, which this month attacked The New York Times for its investigative reporting on Hasidic yeshivas in what amounts to an assault on the First Amendment.

The Times has devoted extensive resources to produce well-researched articles documenting the failure of many yeshivas to provide their students adequate secular education; the exploitation of state funding for special education by those and other yeshivas; and the existence of other inequities in parts of the yeshiva community. The ADL’s New York/New Jersey branch said on Twitter that the reporting seems to “paint the community with a broad brush,” prompting concerns “about stereotyping that could lead to antisemitism.”

The ADL is one of the American Jewish community’s oldest, largest and most respected nonprofits, whose stated mission is to “stop the defamation of the Jewish people and to secure justice and fair treatment to all.” But in this instance the ADL seems to be channeling Agudath Israel, which represents Hasidic and other Haredi Jews, and has been attacking The Times’ reporting on billboards and the internet through a campaign called Knowus.org.

Both groups have advanced the scurrilous claim that attacks against Jews can be linked to an impressive work of investigative journalism. Talk about blaming the messenger.

Investigative journalism is a ‘venerable institution’

The ADL ought to understand the importance of a free press in preserving a democracy and realize the perils to which Jews are prey when the truth is suppressed. Its leaders ought to recognize the importance of journalists who are not afraid to report on specific findings backed with data about any group, and to hold powerful institutions to account. Especially when those institutions have access to public funds — and are stewards of children’s futures.

The ADL’s misguided attack ignores the fact that The Times was doing exactly what we need news organizations to do: comforting the afflicted and afflicting the comfortable.

Investigative journalism is a venerable institution in our nation and an important safeguard of our democracy. It brought down Nixon. It exposed the sex abuse scandal within the Catholic Church. It put an end to Harvey Weinstein’s systemic abuse of women in Hollywood.

And now The Times is hard at work helping the public, and public officials who represent us, understand how Hasidic yeshivas serve their students — and how they may exploit loopholes in state laws and education funding.

The Times’ reporting has spurred change

Following The Times’ reporting, the state’s education commissioner told New York City officials Jan. 10 that they had until the end of June to complete “detailed determinations/recommendations” about the status of secular education in the schools. After more than seven years of stalling, this marks a significant victory for tens of thousands Hasidic children currently being deprived of adequate teaching in English, math and science.

Did the ADL similarly admonish The Times for its reporting on Weinstein or other Jewish criminals like Bernie Madoff and Jeffrey Epstein lest they be accused of depicting negative stereotypes of Jews and inciting antisemitism? No, they did not.

Truth-telling can be dangerous. Just ask the current and former Hasidic Jews who have been telling the truth about the problems with yeshivas for years through the nonprofit group Yaffed. They have received death threats on their voicemails, and been attacked as antisemites on social media, as have the Times reporters — who, incidentally or perhaps not incidentally, are both Jewish — who did this important work.

Attacks against the Jewish reporters who broke the story

“NYT’s Jewish Kanye West is at it again,” an account called @Am_Yisroel_Chai Tweeted at Eliza Shapiro, who covers education for The Times, after she posted her December article about how the difficulties some Hasidic parents have pulling their children out of failing schools.

Yaffed’s leaders have told me that the ADL, whose mission is “to stop the defamation of the Jewish people,” has refused to meet with them about either these attacks on their character or the broader issue.

An ‘educated populace’ should include yeshiva students

Illiteracy is not a Jewish value. Every Jewish group should want to make sure that these yeshivas follow state laws and provide their students with secular education that is substantially equivalent to what they’d get in public schools.

The ADL is not fulfilling its own mission of protecting Jews if it remains on the wrong side of this fight.

The post The ADL is wrong to attack the NYT’s brave investigative reporting on Hasidic yeshivas appeared first on The Forward. 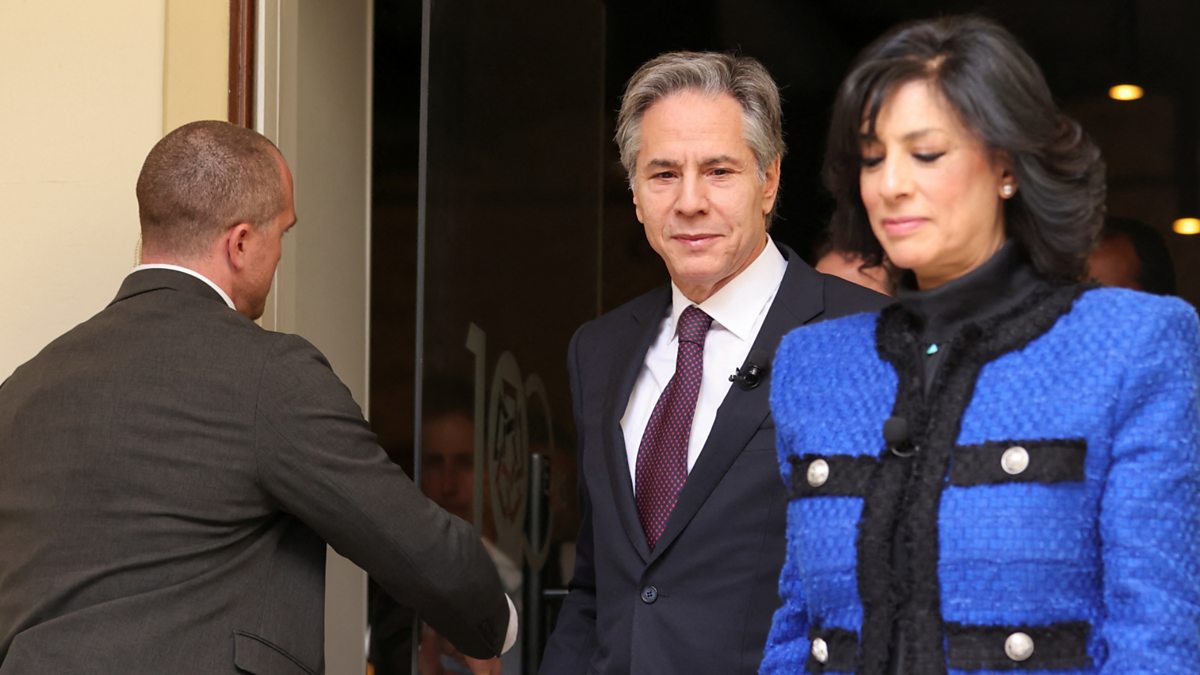 US Secretary of State Antony Blinken has arrived in the Middle East for a three-day visit, as tensions flare between Israelis and Palestinians. After a stop in Egypt, Blinken will head to Jerusalem and Ramallah where he will hold talks with Israeli and Palestinian leaders. We speak to a former US ambassador to Israel. Also on the programme: UK Prime Minister Rishi Sunak sacks the Conservative Party chair Nadhim Zahawi following weeks of revelations about his tax affairs; and Novak Djokovic wins a record-extending 10th Australian Open. (Image: U.S. Secretary of State Antony Blinken visits the American University in Cairo, Egypt, January 29, 2023. REUTERS/Mohamed Abd El Ghany/Pool)